Government participation in the economy, via direct or indirect ownership of private sector firms, is pervasive around the world and is often characterized by two distinct models: the “grabbing hand” model, commonly used to describe Russia and Eastern Europe in the 1990s, where government interference by bureaucrats and politicians represents a key friction to the growth of private businesses; and the “helping hand” model where the government helps private sector firms overcome market failures.

The authors bring these models to an investigation of China’s massive and high-growth economy to determine whether market participants view the government as a grabbing or helping hand, in the context of the multi-trillion-dollar venture capital and private equity (VCPE) market. They combine a field experiment with new administrative and survey data to ask whether—all else equal—firms prefer to receive capital from the government vis-à-vis private investors. Specifically, the authors focus on the matching between capital investors, or Limited Partners (LPs), and profit-seeking firms, that is, the fund managers or General Partners (GPs), that manage invested capital by deploying it to high-growth entrepreneurs. 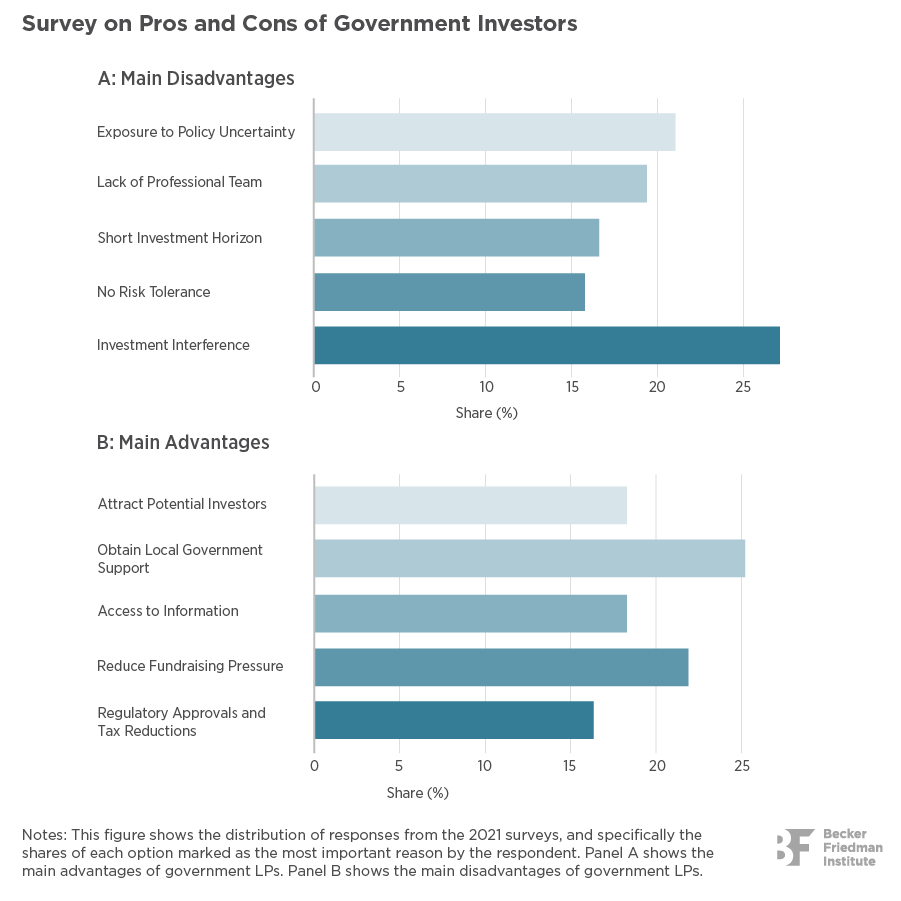 The authors characterize the role of government in the Chinese VCPE market by matching data on VCPE investments from 2015–2019 with administrative business registration records, through which they can observe the ownership structure of all firms (GPs) and investors (LPs) in the data, to establish four descriptive facts:

These facts, while informative, can support many different interpretations, which motivates the authors to estimate actual firm demand for government capital. To do so, they conduct a field experiment in 2019 in collaboration with the leading VCPE industry service provider in China. This collaboration led to an experimental survey of 688 leading GPs in the market (with a response rate of 43 percent), which together manage nearly $1 trillion. GPs are asked to rate 20 profiles of LPs along two main dimensions: (i) how interested they would be in establishing an investment relationship with the LP (under the assumption the LP is interested); and (ii) the likelihood that the LP would be interested in entering an investment relationship with them if they had the chance. Importantly, there is no deception in this survey because GPs know the LP profiles are hypothetical. (Please see the working paper for more details on the survey instrument.)

This work has several implications. On the one hand, by providing direct evidence of the private sector perspective of the advantages and disadvantages of government investors, this research deepens our understanding of the nature of China’s model of economic growth grounded on the dominance of state economic actors. On the other hand, this work makes the simple point that the demand for government capital differs across different types of firms. As a result, to the extent that how capital is allocated depends on the agents receiving it, understanding the demand side is important to fully capture the efficiency implications of government participation, an aspect of the debate that the authors believe has been largely neglected but that is crucial for both theory and policy.